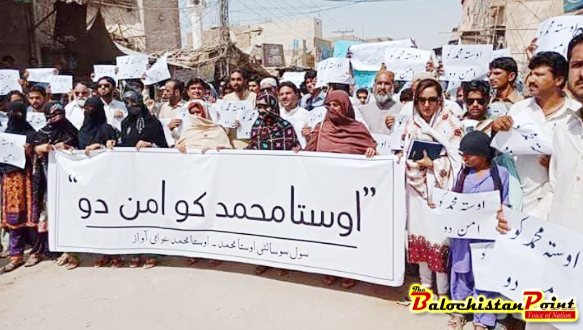 The rise of ‘’Substantiate Peace In Usta Muhammad” campaign

Usta Mohammad, a city in district Jaffarabad is once again on the curb of worsening  law and ordersituation. This is not the first time to say that the public has suffered extreme violent circumstances against the stability of peace.

In every morning when a citizen wakes up and goes to the market to fulfill the needs of a household, he never feels a safe return to home again. Inhabitants in this area live from hand to mouth. A billionaire and a strong can live peacefully with the supremacy of his high-level approach.

The poor law and order situation in the city has forced people to gather under the shadow of one and only motto “Give Peace to Usta Muhammad”.

Mr Naseebullah Jamali launcher of this movement with his team is a forefront pillar of this petty campaign. It is a step for stabilizing the situation within the area. Stimulating unity in people within the city is on the level of promoting peace.

The perpetrators must be brought to the scene for the opposite individually punishment. Police administration is held responsible for all this dismal and gimmicky state of peace within Tehsil by the social activists and active citizens.

‘Substantiate Peace in Usta Muhammad ‘’ no one can avoid this campaign; either he belongs to a political party or a social activism. A murky condition within a city draws many disclosures in subsequent general elections.

The city is not in the state of siege. This worse peace liking situation in the city is a political engineered action done by the supremacy of some re-known politicians. Awami Awaz Organization with the participation of social activists ties civilians soulfully together for one slogan “Lauta du, Usta Mohammad ko Aman du”.

Rallies regarding an erect piece in the city remained part of the campaign. A rally on 25, May, having a motto of rehabilitation of peace in the city accumulated the civilians on the road for their rights.

This campaign is not a political agenda by politicians can interrupt the rush of a wave of consciousness.

To attain lasting peace, the struggle of every citizen, either he belongs to any caste or tribe would continue to make efforts for the restoration of peace. The solution to restoring peace is, use your voting right for the milestone point in the history and stand with strong persistence in front of obscurity.

The writer is regular contributor to The Balochistan Point.

Published in The Balochistan Point on June 3, 2018