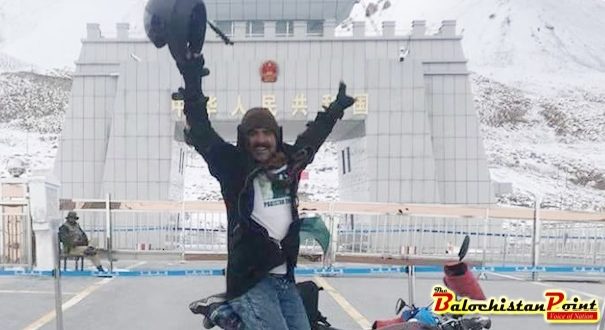 Solo biker for spreading message of peace and love

QUETTA: Motorcyclist Abdullah Al Noor Mohammad Shahi visited 132 cities of Pakistan, accomplishing his mission of spreading peace and building a positive image of Balochistan in the rest of country. When he reached Quetta in May , the citizens of Quetta received him with a warm welcome after completing his 47–day journey at Quetta’s Metropolitan Garden. People of Quetta celebrated his successful journey with full zeal and honored him with traditional Balochi turban on his return home.

Abdullah Al Noor Mohammad Shahi carried the message of peace and love, talking to the scribe he said: “I commenced my journey on April 6th from Quetta. After traveling more than 8000 km and visiting 132 cities I have succeeded to create a positive image of Balochistan in country.”

He also said that he had invited all people he met to come and visit Balochistan, as people living here are more caring and loving.

He said:  “My theme is simple and it is peace which is need of all human beings not only in Pakistan but the entire world and it is our responsibility to promote it.”

Abdullah Al Noor Mohammad Shahi is an actor by profession he wishes to take the message of peace to the world.

Published in The Balochistan Point on June 3, 2018

2018-06-03
admin
Previous: Child Marriage: How the childhood of girls is robbed in Balochistan
Next: The rise of ‘’Substantiate Peace In Usta Muhammad” campaign