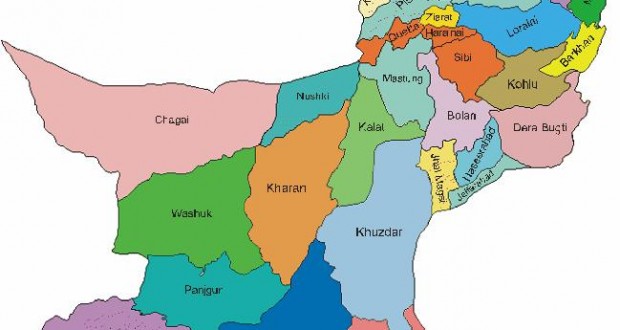 The truth about Balochistan

Over the years, the ruling elite has been polluting the public mind with baseless assumptions and storylines regarding Balochistan. This leaves little room for logical debate on the province and on the appalling socio-economic and political realities that have resulted in the Baloch people’s hostility to the state system.

Despite massive media outreach and the Internet revolution, the rigid perception about Balochistan and its people remains unchanged. Facts about Baloch society and its tribal structure, as well as the outdated government-sustained tribal system in which corrupt tribal chiefs are in collusion with the establishment are rarely analysed. These tribal chiefs have played a leading role in the wholesale destruction of the Baloch society.

The establishment’s standard narrative on the crisis in Balochistan revolves around such standard assumptions as: the sardars and nawabs are the main cause of the province’s socio-economic backwardness; the Baloch uprising is foreign-funded; and Balochistan is fully empowered and governed by the locals.

No serious efforts have been made to understand Balochistan beyond the fact that the province is a mineral-rich region that produces natural gas, and is a colony populated by tribal warlords and their impoverished subjects. There is no denying that the power-hungry tribal chiefs are widely responsible for Balochistan’s woes. But these sardars derive their legitimacy from Islamabad, and are sustained by the government and the civil-military-establishment. However, while the Baloch deeply respect their tribal traditions and culture, this doesn’t hinder their participation in socio-economic development.

The first universities, schools and other centres of learning in Balochistan were established by moderate and nationalist Baloch tribal chiefs who were staunch opponents of colonial rule in the Subcontinent, particularly in Balochistan. In the early 1930s, Nawab Yousuf Aziz Magsi established the first educational institution – Jama-e-Yousufia – in Jhal Magsi. He brought revolutionary changes in Baloch society by encouraging education and opposing the sardari system, despite being a sardar himself. Being very concerned about the welfare of the Baloch youth, he widely campaigned for social and political reforms in the province.

As far back as the late 19th century and the early 20th century, the Khan of Kalat provided scholarships to young people to help them gain access to education in some of the best colleges and universities of India. He also sought the help of the British to establish schools and colleges in Balochistan.

Until 1972, Balochistan was completely ignored when it came to education and economic development. The first Baloch government, headed by Sardar Attaullah Mengal and his visionary education minister, Mir Gul Khan Nasir, gave to Balochistan a university and hundreds of schools and colleges, including a medical college. Special economic zones, including the Hub Industrial Area were a brainchild of Baloch nationlist sardars who wanted their people to be empowered.

In 1972, a resolution was moved in the Balochistan Assembly demanding that the federal government abolish the sardari and jirga systems, since the assembly itself did not have the power to legislate such radical changes. The PPP government at the time took no action in this regard. On February 14 1972, eight months later after the passage of this resolution, the National Awami Party presented the resolution in the National Assembly. On June 8, 1972, a resolution was introduced demanding “the eradication of outdated institutions such as the sardari system, the jirga system and the tribal system so that the province of Balochistan may progress socially and economically.”

In his speech Balochistan’s senior minister Mir Gul Khan Nasir told the speaker: “Four things have been pointed out as hurdles to the economic and social progress of Balochistan in this resolution. These are: the sardari, tribal and jirga systems, and all other measures by means of which the people of Balochistan have been, and are still being, exploited.”

He explained in his speech: “Sardari in the beginning wasn’t a parasitic institution, but when the sardars became agents of an imperial power, the integrity of this institution began to deteriorate. With the passage of time…some knights rose from within the ranks of the sardars…and succeeded in diminishing its influence. But despite this, we do not wish to keep this rusty skeleton of the sardari system as a monument or memorial of the past because as long as this institution remains, even as a vestige, it will keep our nation divided into various tribes and sub-tribes, which will render it impossible for us to achieve economic progress. Therefore, the main objective of presenting this resolution is to completely eradicate from the face of this earth the disease-stricken sardari system…”

In Quetta, Chief Minister Attaullah Mengal unequivocally spoke in favour of the resolution, saying, “Now that the tribal system has lost its advantages, keeping it is going to act as a hurdle in the development of the people of these tribes. And the large amounts of annual allowances being given to the royal families of the states that merged with Pakistan and the sardars are putting undue pressure on the country’s economy. Therefore, the sardari system should be abolished…and the annual allowances to former royal families should be discontinued. And all the responsibilities of the sardars need to be transferred to other institutions, just like in the other parts of the country.”

Despite the opposition of pro-establishment nawabs and jams, the Balochistan Assembly adopted the resolution with overwhelming majority. But Islamabad paid no heed to the demand. Furthermore, any socio-economic development of the Baloch bothered the regional powers, resulting in the dismissal of the first truly elected Baloch government and also in a full-fledged military operation.

The power-hungry sardars and nawabs widely visible on Balochistan’s political scene are a by-product of the establishment’s long-term policies.  These sardars derive their legitimacy from the civil-military establishment, and they misrepresent the Baloch people’s political aspirations.

The present Islamabad-backed sardars follow the establishment’s efforts to perpetuate the centre’s oppressive grip on Baloch society. It is the responsibility of the state, not a sardar, to promote people’s welfare.

When it comes to social and economic services, Pakistani policymakers always use countless excuses for their lack of attention to Balochistan, including its scattered population in a vast territory. But when it comes to the looting of its natural wealth and use of its strategic depth, nothing stops Islamabad from constructing massive tunnels in RasKoh Mountains in connection with the nuclear programme, or building naval bases all over the coast, carrying out gas exploration in the remotest parts of the province, and building airfields and cantonments.

But Islamabad has a clear policy of ‘controlled development’ in Balochistan. They allow development at a certain level and when they see the Baloch have grown socially, politically and even economically beyond the set parameters, harsh policies are implemented, including massive destruction by the use of the brutal security apparatus.

The only thing that bothers the Pakistani establishment is human development. Schools, colleges, universities, hospitals and communication are perceived as a threat to the colonial rule that Pakistan inherited from the British and maintains it through the sardars.

There is an assumption concerning the current Baloch uprising that it is foreign-backed, and that the Baloch are happy with the current state of affairs. But the Baloch struggle for political, social and economic rights is much older than Pakistan itself. Before the Subcontinent’s independence, the Baloch people fought around 120 large and small battles against the British colonialists.

The current uprising is a grassroots movement organised by Baloch nationalist parties. It started when the military regime aggressively expanded its control through the construction of more military cantonments and intensified exploitation of the natural wealth of the province.

The movement aims to stop Islamabad’s harsh and oppressive policies, practices and measures that have affected every aspect of Baloch life. Inequitable distribution of resources, wealth and power among culturally defined groups, such as ethnic and religious communities, will provoke a higher level of unrest.

The anger generated by discrepancies in conditions and expectation shortfalls are the main causes of the violent political reaction. The increasing ‘horizontal inequalities’ are well documented by leading international and domestic organisations. Branding genuine Baloch leaders as ‘foreign agents’ is a short-term strategy to suppress Baloch aspirations. However, such a policy will have irreversible consequences for long-term peace.

Another myth is that Balochistan is fully empowered and the province’s security, development and political affairs are in the hands of the locals. In reality, the so-called provincial government is entirely managed by the federal government and its powerful security apparatus.

Empowerment is the direct opposite of what the people of Balochistan are experiencing: systematic marginalisation. If we compare what the Baloch people confront in socio-economic-political terms with what other ethnic and national groups in Pakistan experience, we discover appalling disparities between the two.

The establishment carefully manages the political process in the province and ensures ‘election’ of politically insensitive and religious elements for the smooth continuation of its invisible rule.

Why does the Pakistani elite make claims about empowerment of the Baloch when Balochistan’s security is completely managed by officials and personnel from Punjab, Fata and Khyber Pakhtunkhwa? The large-scale presence of ethnically imbalanced military, paramilitary organisations and intelligence agencies are a cause of multiple tensions. In multi-ethnic states, the security apparatus needs to reflect the composition of the population.

Balochistan shares long borders with Iran and Afghanistan and has a 700-kilometre-long coastline. However, border and coastal security is completely manned by non-Baloch paramilitary forces. Around 130,000 jobs in the Frontier Corps, the Coast Guard, the navy, the police and the Anti-Narcotics Force are occupied by non-locals and this leaves thousands of Baloch youth unemployed.

For a genuine effort to resolve the prolonged conflict and stop the bloodletting, the government needs to look beyond fabricated stories about life and society in Balochistan.

Together with ignorance and negligence, there are multiple reasons that are hindering the conflict-resolution process between Islamabad and the disgruntled Baloch. As long as falsities about Balochistan are disseminated by state authorities and endorsed by the Pakistani intelligentsia, prospects for a peaceful resolution of the conflict will remain bleak.(Courtesy: The News)

The writer is a former senator from Balochistan; He can be reached at balochbnp@gmail.com Website: www.sanabaloch.com

2013-07-20
admin
Previous: Cases lodged against Sanaullah Zehri’s guards on BHC orders
Next: Being a journalist in Balochistan