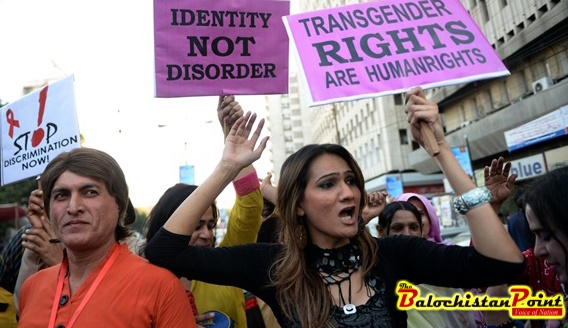 Transgenders, the third gender of human beings that are also referred as Khawaja Sira are the most ill-treated part of society. They are most marginalized and vulnerable community in Pakistan. They are stigmatized as prostitute, beggars and dancers.

Their social degradation in 21st century is really appalling. Due to controversial nature, typical uptight and backward mindset of people the subject of transgender is not even discussed in sophisticated circles. From their birth to adult life, they are subjected to constant discrimination, harassment and made preys of sexual abuse. They even face discrimination at spiritual places like in Shrines.

They are stared & abashed by disgusting lines in Markets and roads. They face rude behavior, raped, tortured and harassed by police, considered inhuman and just taken as toys for enjoyment. In jail, they are put in men where they face ridicule & sexually abused.  There are a lot of harassment cases that are reported and are not focused by Government.

A very surprising factor has been observed that transgenders are mostly humiliated by educated class. A stock of laughter & disgusting lines can be fun for us but indeed they have a heart inside like all of us. A very heartbreaking question arises here that as a citizen of Islamic country & being a part of this educated society, why we are so inhuman…?

To avoid from a sense of disgrace and fear, Parents of transgender handover their child to transgender community where they are nourished under guidance of their Guru. It has been reported that their Guru may involve them in sex work for earning. How parents can be so cruel. They are created by God not by choice. Then why they are treated in so harsh manner. We proudly say we are modern & liberal, but are we..? Liberalism doesn’t mean modification of thoughts but giving every individual the sense of liberty.

Few months back, a transgender and her friend Julie were raped by gang of 12 individuals in Sialkot. They were raped, beaten with shoes, made to drink urine and spat on face. Almost a year back, a transgender activist in KPK, Alisha was shot. She was brought to hospital stretcher, while whole staff was busy in discussion that whether she should be put in male or female wards and asked her fellow transgender to dance in a party. During all this the victim gave up her life. According to Trans-Action group in KPK, more than 45 transgenders have been killed in Peshawar.

The discriminatory attitude of society has deprived them of their fundamental right of education and employment. If a transgender child is sent to mainstream school. Parents and school administration think that they may cause sense of negativity in other children. But studies reveal that transgender children are victimized and harassed by other children. They have very low literacy rate because of lack of family support and social hatred. A very odd myth is seen that people think they can only dance and sing. So, they are rejected from job. Riffie khan, a transgender person, who has done double master in economics and political science was expelled from job for undid sin. That’s the reason that they get involve in begging, dancing. Why this sophisticated society thinks that they can’t play an important role in progress and success of country. How a society can flourish when its whole class is excluded….?

By having a glance on History we will get acknowledged that 14 hundred years ago the Holy prophet (PBUH) and the caliphs   introduced special social, administrative and  monitory reforms for them. In Mughal eras, they were not victims of social stigma and were assigned special roles in royal courts. They should be provided a respectable way of earning in society. If they are not made feel abnormal & nit, they can.

In 2009 Supreme Court of Pakistan instructed NADRA to enlist transgender as a third gender in their databases and then in 2012 they got their NIC as a proof of being a Pakistani citizen. Recently in 2017 several right protection bills for transgender people have been passed that proposed their legal protection against the unfair discrimination by society. Although some organization in Pakistan are working for rights of transgender such as Gender Interactive Alliance, Blue Viens, Trans Action group KPK, Khawaja Sira Society Pakistan, Itthad Barae Haqooq-e-Khawaja Sira.  They don’t have any social and moral support in any walk of life.

Inspite of all these attempts, for inclusion of this minor community in society and to change mindset of society for Trans people some measures should be enforced. The government and  non-government organizations should make social and moral reforms for their inclusion. Clear legislation bills for their protection against harassment and for rehabilitation of their fundamental rights should be proposed.

There is need to take a serious action against such people who are taking advantage of this factor that there is no protection for this community. In light of Islamic beliefs, values and injunctions, Islamic ideology council of Pakistan can play a vital role to make their better image. In this age of development where media has its perks, the print and electric media must arrange talk shows for highlighting this sensitive issue. Government should fix quota in all government and private institutes to accommodate this third gender.

Protection of transgender community is our religious and moral obligation. Country’s willful silence has raised their pain. We might not able to feel their pain, but as a human we should stand up, speak up for them. They deserve a life of respect not such harrowing humiliation.

Muntaha Fatima is Student at university of Gujarat.

Published in The Balochistan Point on December 26, 2017

2017-12-26
admin
Previous:  Education System of Balochistan
Next: Senator Rubina Irfan selected as Chairperson of PPHI Board of Directors