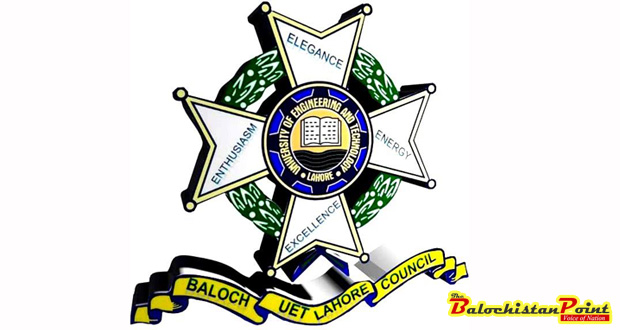 Lahore – Objectives Resolution of Baloch Council of University of Engineering and Technology (UET) Lahore was presented, on Monday.

Objectives resolution was presented on the occasion of farewell party of 2011 session of UET. Baloch Council UET Lahore alumni members Zakir Kannar Baloch, Saddam Samalani and Yahya Azeem Baloch were the chief guests of the event.

Baloch Council UET Lahore is a student’s welfare organization based in UET Lahore. Its members comprise of the Baloch students who get admission in UET Lahore.

Yahya Azeem Baloch, one of the founders of Baloch Council UET Lahore, presented the Objectives resolution of the council in a formal speech.

Following is the transcript of the speech of Yahya Azeem Baloch:

“Before embarking on my formal speech, let me tell you about the importance of an institution. How nicely stated by Voltaire,”Man may die but the fabrics of free institutions remain unshaken.” Institutions play a pivotal role in the progress of any society. Veteran historian Dr. Mubarak Ali underscores the importance of institutions by saying, “Society forges towards Social, Political and economic development by the dint of active and vibrant institutions”. I and rest of the alumni of the Baloch Council consider this council as an institution rather than a mere myopia council. Baloch council as an institution has acquired both fame and popularity through its valuable works and formidable stance. I still remember the beautiful journey of Baloch council started with a week of strenuous discussion. It is then we named it as Baloch council in order to avoid the wrath of Foes and adamant friends. The creation of Baloch Council had many objectives. For instance, it would remain non-political and neither would show any tendency towards politics of any sorts. Moreover, the members of Baloch Council would fundamentally strive to serve the students of Balochistan without any distinction of caste, creed and religion. The representation of Baloch culture and that of other ethnic groups settled in Balochistan was also among its main objectives.

What made Baloch council different from other institution was its unique vision. Once a wise man named Winston Churchill said “The empires of the future are the empires of minds“. To the person who doesn’t know where he wants to go, there is no favorable wind. We had a vision and that vision was to exhibit a positive image of Baloch and Balochisatan. We wanted to show the rest of the people that the masses of Balochistan know how to love, how to live in peace and how to progress. We the Baloch Council took the most taunting decision to invite other ethnic groups to our welcome and farewell parties to display how much progressive we are. I am quite saddened to realize that Baloch Council has compromised over its vision of creativity and innovation. I urge the new cabinet to tighten its grip over innovation and creativity.

Leadership lies in the core of any institution and Baloch council is no different. The importance of leadership can be judged from this sagacious quotation. “If your actions inspire others to dream more, to learn more, to do more and become more, you are a leader“. A leader with a great vision can accomplish any goal no matter how much difficult and strident it may be. The chairman of Baloch Council should firmly adhere to the vision and objectivesof Baloch Council come what may. He must remain non-political, enjoy the trust of entire council and by far he ought to be free from every type of ethnic, religious and parochial discrimination. I urge and request the new chairman to follow the footprints of the previous chairmen who had remained loyal to the vision and objectives of the Baloch Council.It should be noted here that the objectives are subject to change whereas the vision is irrevocable and unchallenged.

While the slot of party leadership plays a crucial role for the integrity of any institutions, it is the cabinet or governing body that performs a critical role in assisting the party leader to live up to the aspirations of the members. The leaders must respect the dignity and decorum of the cabinet. Decisions should be taken after mutual consultation. The worthy cabinet must help the fallible chairman while taking crucial decisions. After all, a chairman is not a despot, nor a monarch of Saudi kingdom. It is incumbent upon the new leadership to take into confidence every member of the Baloch Council without any regard to session and seniority.

In order to avoid any discord within the council in the foreseeable future, the new cabinet and chairman should work hard to develop the much-needed constitution of the council. Constitution must be comprehensive to escape any conflict and internal dissension. It must clearly and loudly declare that Baloch Council is a non-political organization. While keeping the sanctity of the cabinet at high esteem, it must take firm steps to rule out any possibility of totalitarianism.

To conclude, on behalf of Baloch Council alumni, I wish the out-going session best of luck and I heartily welcome the new cabinet and its chairman. I hope and pray the new leadership and cabinet would endeavor hard to propel the Baloch council to new heights of success and prosperity.”

Published in The Balochistan Point on May 19, 2015