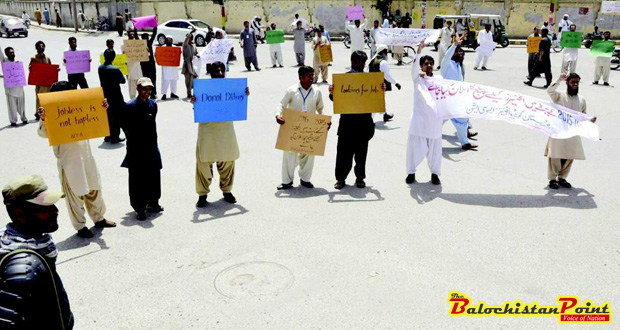 Quetta – Unemployed engineering graduates protested against non-availability of hobs in Quetta, on Monday.

Protest was held under the auspices of Creative Engineers Association. Protestors started rally from metropolitan corporation office and held a sit-in protest on secretariat chowk.

Protestors demanded that government should provide jobs to unemployed graduates.

“Majority of engineering graduates are either unemployed or doing small level jobs such as tutoring,” lamented a protestor. “If government can’t provide us jobs then they should shut down engineering faculties in all universities of the province,” added the protestor.

Unemployment is a major issue in Balochistan and majority of graduates in all fields are unemployed.

Siddique Baloch, veteran journalist and Editor of Balochistan Express, told The Balochistan Point in an interview, that every year 25,000 students graduate from Balochistan and hardly 2,000 of them get jobs.

Published in The Balochistan Point on May 5, 2015