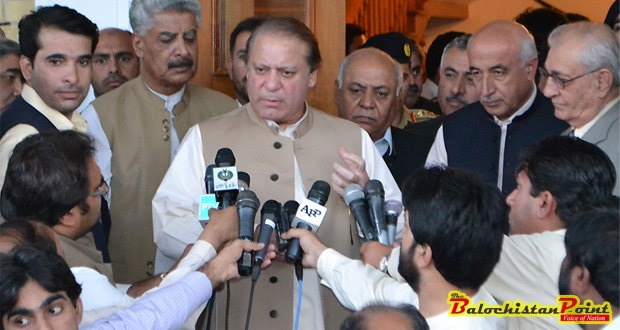 Quetta – Major part of center of Quetta was shut down due to arrival of Prime Minister Nawaz Sharif in Quetta, on Tuesday.

Prime Minister Landed in Quetta on 2:00 PM and left the city at 3:45 PM, aviation sources told The Balochistan Point.

Commuters and shopkeepers had to face a great deal of inconvenience due to the unannounced visit of Prime Minister.

“We faced a curfew like situation in our own city, just because our Prime Minister arrived here for couple of hours,” Shah Din, a citizen told The Balochistan Point.

“Education of thousands of students was suspended today just because Prime Minister visited the city,” lamented Abdullah, whose children study in a school on Zarghoon Road. “We request Prime Minister to please have some mercy on us and direct the authorities to ban closure of roads during VIP movement,” added Mr. Abdullah.

Whenever Prime Minister or President visits Quetta, entire traffic system is disrupted due to closure of roads which is a part of protocol of these dignitaries.

Published in The Balochistan Point on May 5, 2015