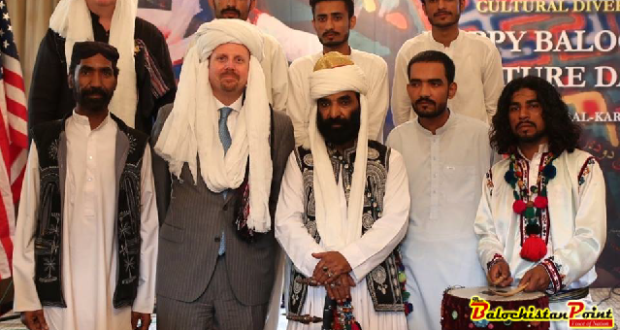 Popular Baloch folk singer Akhtar Channal Zehri performed at the occasion. This is the second year the consul general marked the occasion at his residence.

In his welcome remarks during the Baloch Cultura  Day at US consulate in Karachi  Consul General Brian Heath said,“The US Consulate General in Karachi represents the United States in Sindh and Balochistan,” “While geography makes it difficult to meet with officials and citizens from Balochistan as often as we might like, we do our best and today’s event is a reflection of that.” He added

Popular Baloch folk singer Akhtar Channal Zehri performed at the occasion. This is the second year the consul general marked the occasion at his residence.

The consul general stressed the importance of cultural interaction in building lasting relationships. “Pakistan can be proud of its incredible diversity,” said Mr. Heath, while expressing his appreciation for Pakistan’s rich cultural heritage.

The Faculty of Education Building at Lasbela University (under construction) aims to become a national center of excellence in the field of education.

Brian Heath said that Journalism training and exchanges were a top priority. “The U.S. Consulate General Karachi sent five Baloch journalists on programs in the United States, during their three weeks in America, they worked with U.S. journalists and TV producers to share information and develop new skills.” He informed