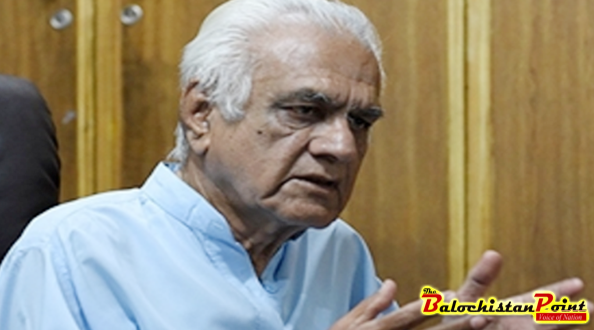 Sources told that he would be laid to rest in Karachi.  He was suffering from cancer for many years.  He was 77.

Baloch was English-language journalist, and an authority on Balochistan’s social, political and economic matters.

Siddque Baloch was one of the most widely quoted journalists by the Pakistani and International media on Balouchistan-related issues.

The expert journalist authored a book on the politics and economy of Balouchistan, titled A Critical Comment on the Political Economy of Balochistan, which was released in January 2004.

Balouch was born in the area of Lyari, on 10th August 1940 in Karachi, but migrated to Quetta, Balouchistan in 1990.   Balouch took an active part in politics from an early age. As a student, he was elected as the President of the Students’ Union at the SM College from 1963–1964.

Mr. Siddque Baloch joined Pakistan’s   widely circulated newspaper, Dawn, as its sub-editor in 1966, and worked there in different capacities for 28 years. In 1981 he served as elected President of the Karachi Union of Journalists (KJU). He took an active part in the freedom of expression movement, and served two terms. He was also elected as President of the Balochistan Newspapers Editors Council, and as a Vice-President of the Karachi Press Club. He served the Council of Pakistan Newspapers Editors (CPNE) as its Balouchistan Vice President.

Siddque Baloch was also one of the founding members of the Baloch Students Organization (BSO), when it was established in 1962, and became its senior vice president in 1966. He remained active member of the left-wing National Students Federation (NSF), and participated in the Anti-One Unit movement, as well as a campaign against three-year degree courses. He was also was affiliated with the National Awami Party (NAP) and served as Press Secretary to NAP’s Ghouse Bux Bizenjo.

Published in The Balochistan Point on February 6, 2018