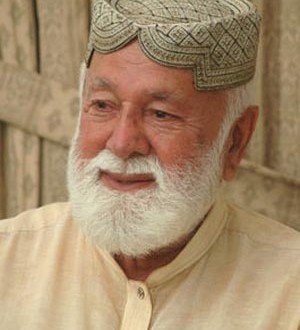 Karachi: Veteran Baloch nationalist and former Member of National Assembly Nawab Khair Bukhsh Marri has been hospitalized in Karachi on Friday. He has been shifted to the Liaqat National Hospital Karachi and being treaded in ICU.

According to the media reports 86- year old Baloch nationalist Nawab Khair Bukhsh Marri has been hospitalized in Karachi.

Khair Bukhsh Marri is chief of Marri tribe of Baloch nation.  Marri, the seasoned leader has adopted hibernation in Pakistani Politics. Khair Bukhsh Marri has spent most of his life time in exile, but he never compromised on his principles for Baloch rights and ownership of Baloch land. He openly supports armed struggle for Baloch independence on every forum, but denies being leader of ongoing militant movement in Balochistan.

Marri thrice escaped from conspiracies of assassination; as well he had gone behind bars time and again. In general Ayoub’s regime he stood with firm stance against state power and recognized as Balochs’ rights defender.

Khair Bukhsh Marri announced renounce of centuries old tradition “Khal”, (a levy quota of Sardar on income and wealth of tribesmen), which considered as a revolutionary act and became a major factor of his fame.

In 1968 he opposed Ayoub Khan regime to become part of that; however, in 1970 he agreed with Yahya Khan on condition of dissolution of one unit, because of this the way for elections was paved.

In 1973, with his fellow politicians he denied to sign on constitution, and opposed draft lacking provincial autonomy content. After nine months Zulfiqar Ali Bhutto dissolved provincial government of National Awami Party and sent leaders to jail. It is said that Mr. Bhutto had much aversive to Khair Bukhsh Marri and conspiracy weaved to poison him in jail, but the wicked plan failed.

In General Musharraf dictatorship Nawab Marri was arrested allegedly involved in murder case of Justice Nawaz Marri. However, it could not be proved and he was   released.