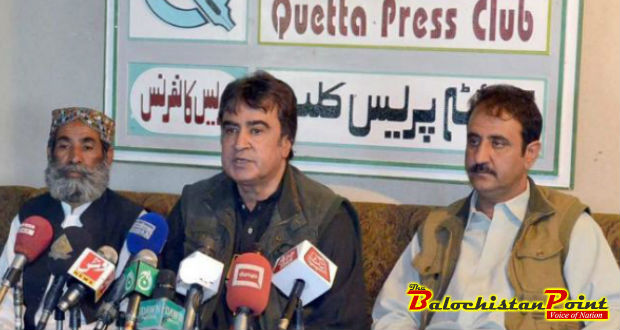 We are Disappointed on Report of Judicial Commission: Jehanzeb Jamaldini

“Dynamics of election rigging in Balochistan were different from Punjab and Judicial commission only focused on Punjab,” said Senator Jamaldini.

Commenting on the efforts of National party to bring Khan of Kalat to Balochistan, Dr. Jamaldini said, “We are not satisfied with the way negotiations are being conducted with Khan of Kalat.” He complained, “We should have been taken into confidence by Balochistan government.”

Dr. Jehanzeb expressed his apprehensions that CPEC would unfavorably change the demographics of Balochistan for the natives.

“We want assurances, in the form of legislation, that CPEC will not negatively affect demographics of Balochistan.”

He warned the ruling coalition of National Party (NP), Pashtunkhwa Milli Awami Party (PKMAP) and PML-N that they will pay the price for remaining silent on injustices meted out to BNP.

In the end, BNP leader announced protest schedule of the party against killing of their activist. Protests by BNP activists would be held all over Balochistan, Dera Ghazi Khan and in some districts of Sindh.

Published in The Balochistan Point on July 30, 2015