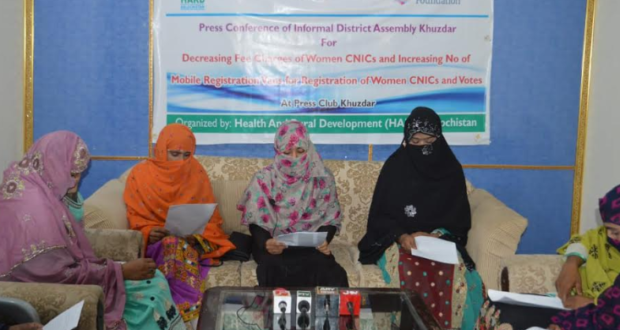 KHUZDAR:  The second biggest district of Balochistan, Khuzdar along with more than 25 districts are in the clutch of extreme poverty and a large number of other problems. As per the survey of Sustainable Develop Policy Initiative report 2018, more than 52% people living below from the poverty line in the province and in another survey report published by WFP in 2019 that indicates 4.4 million people are affected by severe drought in Balochistan province. The drought has devastated their lands, cattle’s, agriculture and increased their food insecurity and many families compelled to migrate in other parts of the region. A delegation of Informal District Assembly Khuzdar raised these issues at a press club here on Wednesday in Khuzdar.

On the occasion, journalists, representatives of CSOs and other activists were present over there in the press conference. The press conference held by Health And Rural Development (HARD) Balochistan with the help of Commonwealth Foundation to divert the attention of the Government Authorities on the issues and  worst situation of people.

Miss Fazeela Shaheen from women assembly said that impact of climate change have taken in the grip the whole Balochistan but these impacts devastating in Khuzdar. The springs, rivers and fruit orchards have been dried and temperature increasing alarmingly and groundwater table dropped highly that put the Khuzdar under the mercy of disaster. The entire regions is suffering many disaster due to climate change mainly the drought which affected more than 18 districts where a countless number of children suffering from acute malnutrition and adolescent girls and women from anaemia.

Miss Rukhsana Salam from HARD Balochistan said that women and girls facing countless issues, challenges and violence within Khuzdar even in the entire Balochistan province of Pakistan. As per the reports 30 women killed due to stigma and honor in 2018, thousands of women experienced gender based, sexual, acid attack and domestic violence in 2018. The child abuse, early and forced child marriage mainly girls increasing terrifyingly and child abuse also increased 10% more compare to the previous years. The early and forced child marriage has increased girls drop out from schools and their unintended pregnancies that is caused their high mortality rate and their children as well as fuelling up an increased health complications, sexual and domestic violence against them. The mother mortality rate is 1400 on per 100000 which is extremely high in Balochistan and same Pakistan is the 7th highest country having an alarming rate (74.7 per 1000 live birth) of Infant mortality rate as per UNICEF 2018.

Miss Naeela said that more than fifteen thousand student’s future and one thousand female teacher’s jobs at risk because they did not receive their appointment orders after two years services and salaries from last six months but they are performing their duties regularly.

Miss Rehana Wahab said that about 1.2 million women donot have CNICs which is depriving them from their right to identity, citizenship, vote and other rights and also increasing gender imbalances in politics and democratise governance, so it necessary that NADRA its Mobile Registration Van and registration Centres in all districts and reduce the formalities and long procedure of CNIC making in order that more and more get their CNICs easily. The Election Commission must start voting registration in each and every city, towns and villages to enlist unregistered women voters in electoral system.

She further said that Local Bodies have been dissolved in the whole province but the government is not holding the Local Bodies Elections. Consequently, the poor people are suffering and deprived of their rights which ought to be availed at door steps that is why local government election must be held as soon as possible.

Miss Saqiba Dur figured out that 2.3 out of 3.6 million children mostly girls are out of school in Balochistan and in Khuzdar the lack of schools, teachers, reading and writing materials, access and female teachers and the missing school facilities, poverty, early and forced child marriage, drought and malnutrition and different religious and tribal bearers are the core issues keeping child out of schools.

She further said that in khuzdar, the absence of Gynaecologists, drugs, machineries, and modern surgical equipment in Hospitals, selling of counterfeit and substandard medicines in pharmacies, lack of paramedical staff, untrained doctors and in rural areas dysfunctional and lack of Basic Health Units  are important issues which needed to resolved on urgent basis.

Miss Jameela Brahui said that the poor drainage, street roads, cleanliness and heaps of waste causing different health diseases and the city waste is being dumped in Kathan Valley whereas the sewerage outlet has been given in Koshk River which polluting the water and making the people of Gaj Kolachi and other nearer areas sick by increasing water-borne diseases.

She also added that the unscheduled power load-shading more than 15 hours out of 24 hours in a day and the voltage fluctuation of electricity is an order of the day which impeding overall work of markets and offices and results in damaging the valuable electronics and equipment of citizens.

She further said that now-a-days Khuzdar is entangled in the clutch of narcotics. Consequently, the young generation is being addict of narcotics very rapidly which not only damages their health but also creating serious health and social problems for them and their families.  This curse is penetrating in the surrounding areas speedily, all these issues of Khuzdar needed urgent attention from the district authorities.

The delegation of women assembly demanded the district authorities and provincial government to take comprehensive strategic and immediate actions to overcome the above issues to give relief to the public and advance women rights and lives by honouring the rights of citizens guaranteed in the constitution of Pakistan.