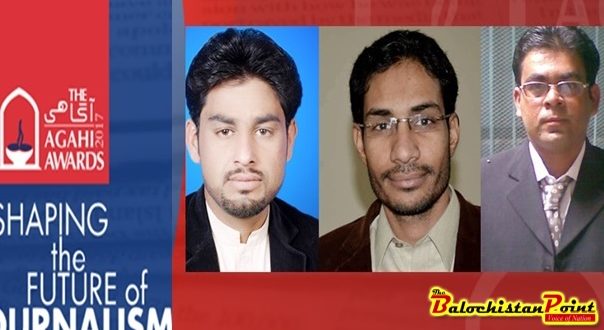 ISLAMABAD: Three young journalists from Balochistan received Agahi Awards 2017 as journalists were recognised for their work in more than 40 categories. Yousaf Ajab Baloch, founder and Editor-in-Chief of The Balochistan Point received award as the best journalists of the year  2017 in category of Anti-corruption, whereas Murtza Zaib Zehri  was awarded  in category of Competitiveness and Zareef Baloch from   Haal Ahwal  received award in  reporting Health issues.

The AGAHI Awards recognizes the efforts of journalists and the media community every year. The best of the media industry striving for ethical journalism from all across Pakistan were recognized as Journalists of the Year in their respective categories today at the Pakistan National Council of Arts in Islamabad.

Ethical and quality journalism enhances collective consciousness of a society that builds a nation’s identity and purpose by promoting free, responsible and democratic utilization of the media. The AGAHI Awards acknowledges journalists’ professional commitment to promoting accountability for safeguarding public interest. The objective of AGAHI Awards is to recognize and appreciate the best journalistic practices in Pakistan, creating a healthy competition within the media, encouraging ethical and professional reporting practices.

The ceremony was hosted by Saima Shirazi and Shamoon Hashmi. This year AGAHI Awards received more than 3000 nominations from all over the country in 40 different categories from print, television, radio and online media. The AGAHI Awards received an overwhelming response from the journalists’ community – reaching more than 6 million Pakistanis through social media and almost 1 million through SMS for the Peoples’ Choice Awards categories: “Favorite News Channel of the Year” and “Current Affairs Anchors of the Year” in Pakistan. Big data and sentiments analysis was deployed to measure the responses for the people’s choice award categories.

The winner of this award is Zahid Mazhar from Zara Hut Kay! #AGAHIAwards2017 #AGAHIAwards pic.twitter.com/yJsY1suJ3B

Puruesh Chaudhary, President AGAHI and the co-founder of the AGAHI Awards while giving the welcome note said, “This year AGAHI Awards celebrates responsibilities’; in 2017 as the nation marks its 70th year of independence – we should recognize the tremendous effort of the journalist community in the creation of this country, this is the strength of free media.

Amir Jahangir, CEO Mishal Pakistan and co-founder, AGAHI Awards, in his welcome address said, “Pakistan has completed its 15th year of electronic media deregulation in the country. AGAHI Awards provides that pivot for media to reflect on the professionalism and credible journalism which creates value towards the public.” He further said, “We are happy that AGAHI Awards has created that platform for the journalists to be that voice of accountability in Pakistan and beyond.”

Speaking at the occasion, Waqar Ahmad Head of Corporate Affairs, Nestle Pakistan said, “Media has an extremely important role to play in raising awareness on Pakistan’s nutrition and water challenge. By adopting a collective approach, Nestle Pakistan has taken a lead to promote water stewardship locally. We are also committed to addressing the grave challenge of hidden hunger by providing greater access (in both urban and rural Pakistan) to Iron, Zinc, Vitamin A and D fortified products to our consumers. By partnering with AGAHI Awards in the categories of Water Stewardship and Hidden Hunger, we would like to recognise journalists who have raised and identified these key issues being faced by Pakistan”. 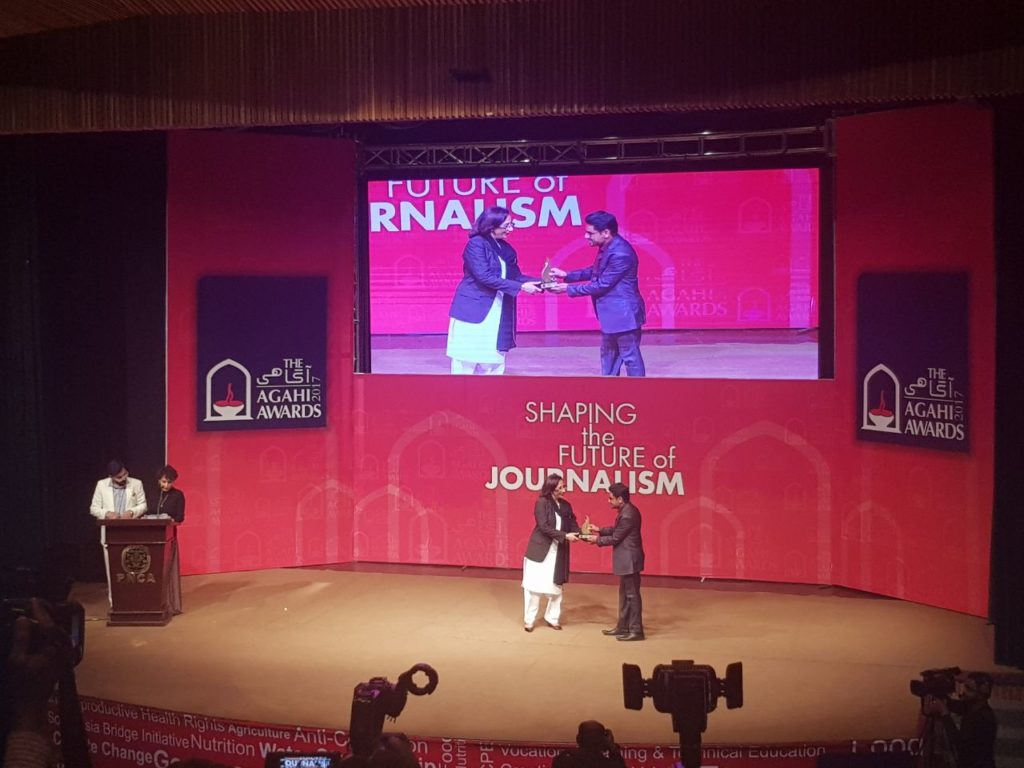 Yousaf Ajab Baloch, Editor-in-Chief of The Balochistan Point is receiving award as the best journalist of the year.

AGAHI Awards recognizes ‘accountability’ as the key currency for public trust in this evolving attention economy, where media becomes the platform to promote social values and transparency. AGAHI Awards is the recognition of journalists who have shown personal integrity and professional excellence to make Pakistan a more informed nation.

Inaugurated on March 28th, 2012, the AGAHI Awards are Pakistan’s first ever journalism awards recognizing the best journalists in more than 40 different journalism thematic beats. Through this initiative, AGAHI and Mishal Pakistan, in collaboration with leading press clubs across the country, local and international media development bodies, academia, regulatory authorities and the private sector, have been playing an instrumental role in promoting media diversity.

The AGAHI Awards are the most sought-after journalism recognition in Pakistan. The Awards have been the foremost development initiative for media and journalism in the country. The awards have identified some of the most talented and diligent journalists in the industry. The AGAHI Awards winners have now acquired decision-making and leadership positions across the media industry for “Shaping the Future of Journalism” in Pakistan.

it’s such an honor & privilege to have the entire journalist community in Pakistan come together & celebrate quality journalism, our phenomenal jury who from their extremely busy schedule make the effort to review thousands of nominations…thank you all! #AGAHIAwards2017 pic.twitter.com/5DaEzw6OaC