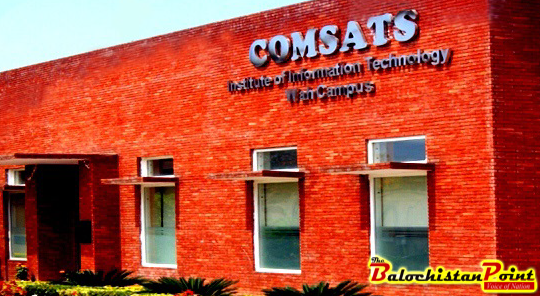 Islamabad: Chief Minister of Balochistan, Nawab Sanaullah Khan Zehri, said it would be a great honour for students from Balochistan to be able to study at a prestigious institution like COMSATS Institute of Information Technology (CIIT), which has recently been been ranked at the top position among all universities of Pakistanby The Times Higher Education World University Rankings (2016-17), U.K.

He was speaking at a function organized by COMSATS Institute of Information Technology (CIIT) in honour of the chief minister Balochistan and 170 students hailing from various universities of Balochistan. The colorful function, held in the lush green lawns of CIIT’s Islamabad Campus, included traditional cultural and musical performances by students from Balochistan and CIIT. The visitors said they were impressed with the hospitality extended by CIIT and the facilities at the campus.

Rector CIIT, Dr. S. M. Junaid Zaidi welcomed the Chief Minister and delegation from Balochistan. During his address, Dr. Zaidi announced that all students from Balochistan who qualify for admission to CIIT on merit would be offered PhD scholarships by the Institute. This would enable them to receive quality education and access to state-of-the-art laboratories and research facilities. The audience responded with a thunderous applause and the CMwelcomed the generous offer. It is pertinent to mention that quite a few students from Balochistan have studied and graduated from CIIT in the past.

Highlighting the political situation in his province, Chief Minister Balochistan said a handful of miscreant splaying in the hands of foreign elementswere involved in terrorist activities in Balochistan. The people of Balochistan were loyal and patriotic and loved Pakistan.

Nawab Zehri said that the situation in Indian Held Kashmir, which is a disputed territory according to UN resolutions,was very different from Balochistan, which is an integral part of Pakistan, and the two could not be compared. Further dilating, he said the people in Indian Held Kashmir wanted freedom from India and to get away the brutality of Indian armed forces. In contrast, thepeople living in Balochistan loved Pakistan.

Dispelling the fabricated Indian propaganda as bogus, he said one could not declare it as a “freedom fight” if just a few misguided youth had somehow been persuaded to engage in militancy and anti-peace activities in Balochistan.He assured that the people of the province truly loved Pakistan and were very patriotic.

Chief Minister Zehri said the enemies of Pakistan were involved in terrorism in Balochistan, which had been escalated in scale the minute China Pakistan Economic Corridor (CPEC) projects, like development of the Gwadar Port, were announced.

Published in The Balochistan Point on October 2, 2016