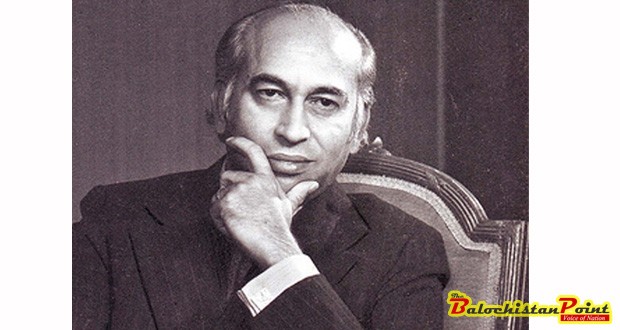 The year was 1972. The wounds of Pakistan’s breakup were fresh. For the first time in the history of the country, power was being transferred to provinces after direct elections. It was a new beginning for Pakistan.

The government of National Awami Party (NAP) was in power in Balochistan. After 25 years of struggle, finally the people of Balochistan had got the right to rule their province. Nine months into government, the dream was shattered courtesy Zulfiqar Ali Bhutto.

April 4 is observed as the death anniversary of former Prime Minister Zulfiqar Ali Bhutto. Opportunist politicians who get votes in the name of Bhutto and some misguided “jiyalas” observe this day and remember Bhutto as a hero. Just because his government was toppled by Zia-ul-Haq, the worst dictator in the history of Pakistan, Bhutto’s antagonistic role in Balochistan has been completely forgotten.

NAP government in Balochistan took power in May 1972 and it was dismissed by Bhutto on flimsy charges in February 1973. During this short period of nine months, there was not a single day when the NAP government didn’t have to face political machinations and pressure tactics thanks to Bhutto. The bureaucracy of Balochistan was under the federal government’s control at that time and Bhutto instructed all bureaucrats to not obey orders of NAP government ministers. Bhutto through his henchmen manipulated Balochistan Police to go on strike and created problem for NAP government to rule the province.

That was not all, Zulfiqar Ali Bhutto who was the prime minister stooped low to the level of a street thug. He engineered riots and civil disorder in Pat Feeder Canal area and Lasbela district. When a country’s premier is hell bent on creating disturbance in a city, then of course, for obvious reasons no one can stop him. Finally, he concocted the Iraqi Embassy Weapons discovery case as the final excuse to topple the first democratically elected government in Balochistan.

In the aftermath of the NAP government’s dismissal, people vehemently protested against the Bhutto regime. Proving to be a true civilian dictator, Bhutto sent in the army and started a full scale military operation that would continue for the next four years. It’s ironic that it was General Zia-ul-Haq who called off the military operation in Balochistan after toppling the Bhutto regime.

Zulfiqar Ali Bhutto is known as a democrat and his party, PPP, claims to be the torch-bearer of democracy in Pakistan. What Bhutto did in Balochistan after dismissing the NAP government was nothing but barefaced mockery of democracy.

Of the then 21 members in the Balochistan Assembly, 14 belonged to NAP and 7 to the opposition. There was not a single member of PPP in that assembly. Bhutto nominated Jam Ghulam Qadir as the chief minister and he ruled the province with the support of seven out of the 21 members. In 1973, the budget of Balochistan was passed on Radio Pakistan because there were not enough assembly members with the government to pass the budget.

In the 1970 elections, PPP had won convincingly in Sindh and Punjab but was totally rejected in Balochistan and NWFP, now Khyber Pakhtunkhwa. Bhutto being an egoist and an autocratic leader could not digest this realty. As a result, he didn’t leave any stone unturned in ensuring that PPP forms government in these two provinces. By employing all undemocratic methods, Bhutto was successful in forming governments in both of aforementioned provinces within two years.

The policies of Bhutto destroyed Balochistan. Military operation in the province took its toll on the people. According to official figures 5,500 civilians died during this operation. It goes without saying that official figures are always understated in such cases. Bhutto pushed Balochistan out of mainstream Pakistan and created a problem that exists till date. If Bhutto had allowed the democratically elected government of NAP to complete its term then Balochistan would have been better integrated in the federal structure of Pakistan today.

The NAP government in Balochistan consisted of gems like Nawab Khair Baksh Marri, Ghaus Baksh Bizenjo, Gul Khan Naseer and Sardar Attaullah Mengal. Due to the villainous role of Bhutto in Balochistan these political stalwarts couldn’t effectively become a part of mainstream politics. That was not only a loss for Balochistan but also for Pakistan.

Every rise has a fall and the same was the case with Zulfiqar Ali Bhutto; the forgotten villain of Balochistan. After treating Balochistan like an occupied territory for four years, Bhutto was preparing for his end. By 1977, he had become unpopular due to his autocratic attitude. In order to surprise the scattered opposition, Bhutto announced elections 18 months before time in March 1977. Bhutto massively rigged those polls and it triggered a country wide protest against him. Finally on the fateful day of July 5 1977, autocratic rule of Bhutto abruptly ended.

In his book “Rumor and reality” Bhutto writes about casualties in Balochistan claiming that thousands of people die when military operations are conducted and that it’s not a big deal. In this context, what I am about to write might not be liked by many, but let me say that eventually, Zulfiqar Ali Bhutto got what he deserved.

Republished in The Balochistan Point on April 4, 2015