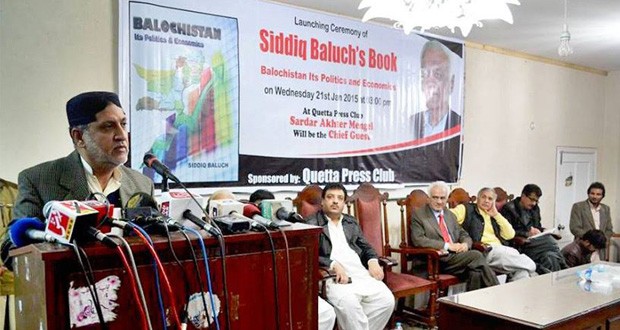 Attitude Of Center Towards Balochistan Has Not Changed For Last 67 Years: Akhtar Mengal

Quetta: Attitude of Federal government of Pakistan has not changed towards Balochistan for the last 67 years, said Sardar Akhtar Mengal, Chief of Balochistan National Party (BNP).

Former Chief Minister said this while addressing the book launching ceremony of “Balochistan: Its Politics and Economics,” authored by veteran journalist Siddique Baloch.

Book launching ceremony took place in Quetta Press club and it was attended by journalists and political activists.

Chief Guest of the ceremony, Sardar Akhtar Mengal, said that 60 activists of BNP have been assassinated in last few years due to the principled stance of the party of Balochistan.

In a tone that sounded pessimistic, Mr. Mengal said that “I don’t see any betterment in the future of Balochistan.” He added, “I only see increase in number of orphans, widows and graves.”

BNP chief criticized the intellectual suppression in Balochistan at the hands of federal government. He quoted the example of History book of “Lala Hatoo Ram” about Balochistan which was banned recently. “Where words of intellectuals are not tolerated there is no room for political dissent in such a place,” lamented Mr. Mengal. 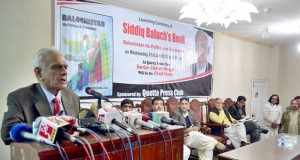 Siddique Baloch, author of the book and editor of Balochistan express said on the occasion that Balochistan has been kept economically backward from the day one. He termed Balochistan a security province and said that all policies about it are made from security point of view.

Painting a picture of economic disparity in Pakistan, Mr. Baloch said that over the course of last few decades, number of billionaires in Punjab has increased and same number has decreased in Sindh and other provinces.

He prophesied that Iran and Afghanistan will militarily intervene in Balochistan in future when an opportunity presented itself.

The Book launched in the ceremony is a compilation of the articles written by Mr. Baloch, over the course of last few years in his newspaper.

A mini documentary about the life and work of Mr. Siddique Baloch was played in the beginning of the program.

In the end, President of QPC presented shields to Akhtar Mengal and Siddique Baloch.

Published in The Balochistan Point of January 21, 2015

2015-01-21
Editor
Previous: Editorial: BDF Reflects Lack Of Seriousness By Balochistan Government
Next: Past Walks With Me‏