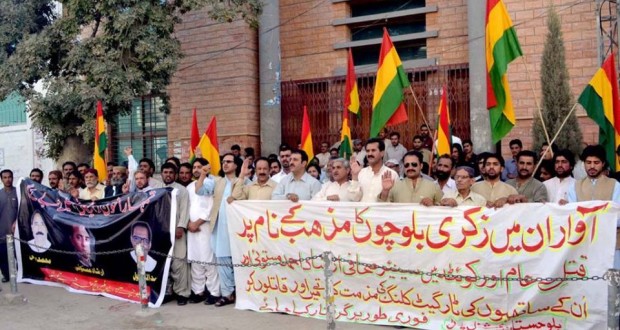 BNP protested against killing of Zikris and journalists

BNP activists in huge numbers chanted slogans against provincial government and security forces for their alleged involvement in attacks on Zikri community and journalist Irshad Mastoi. The protestors were carrying placards and banners which lamented the failure of government to bring an end to target killings in Balochistan.

Talking to media personnel outside Quetta Press club, Agha Hassan Baloch the spokesman of BNP, said that “Unarmed and innocent Zikri people are being victimized by state-backed armed groups. This should stop.” He also criticized the failure of provincial government in providing security to journalists who are being killed inside their office in center of Quetta city.

Journalists have also protested against killing of their colleagues last week. The protests of journalists and political parties like BNP have fallen on deaf ears so far.

Published in The Balochistan Point on 4th September, 2014.

2014-09-04
Editor
Previous: Online Shopping Habits of Consumers in Pakistan
Next: All Bus and coach stands of Quetta will be shifted to Hazar Gunji till 15th September