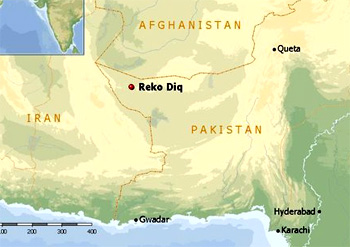 Quetta: A press conference was held by Dr. Malik Baloch, Chief Minister (CM) of Balochistan, in which he rejected all the allegations of alleged corruption in Reko Diq, Yesterday,

Dr. Malik said that “I will not sell a stone of Balochistan; Reko Diq is something very big.” He also announced to send a defamation notice to Dr. Shahid Masood for leveling a baseless allegation against him.

Reacting to the press conference of Dr. Malik, Dr. Shahid Masood cleared that his allegations about kickbacks in Reko Diq deal with Tethyan Copper Company was a pre-emptive story. He said that he stands by his allegations and would respond to any defamation notice sent by CM of Balochistan.

Nawab Aslam Raisani, former CM of Balochistan, said that son of a top leader in government has finalized the deal on Reko Diq. He also supported the allegation that massive irregularities are expected in forthcoming Reko Diq deal.

“I was the one who cancelled the contract of TCC and saved Reko Diq from exploitation and as a result I had to face a suicide blast and my government was toppled unconstitutionally,” added former CM.

Balochistan National Party (BNP) has said in a statement that “We will resist any move to sell Reko Diq to foreign companies against the interests of Balochistan.” BNP also announced to hold a protest demonstration against alleged corruption in Reko Diq on 18th December.

Molana Abdul Wasay, opposition leader in Balochistan Assembly, said that if an unfair deal is made on Reko Diq then His party will challenge it in International Court of Justice. “If CM is not making a secret deal on Reko Diq then why is he going to London with certain people who have no business with Balochistan government,” asked Mr. Wasay.

Published in The Balochistan Point on December 12, 2014