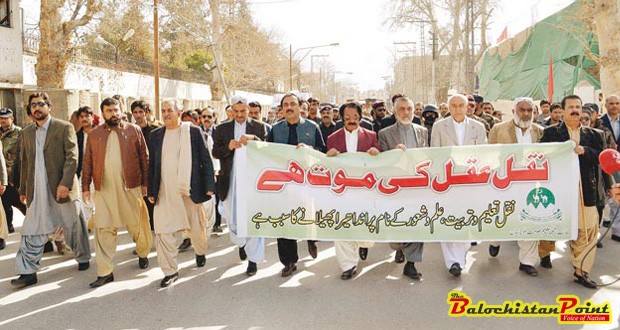 Recently announced intermediate results showed the real face of steps taken by the Government of Balochistan in the name of “Educational Emergency.”

Only 28% students were able to pass the exams and from those passed almost half stets have secured marks in second and third division. This clearly shows flaws in educational system that must be solved. This emergency should not remain restricted to elimination of cheating or strictness in examination centers, but Balochistan needs a blasting change in education sector.

Firstly, Government of Balochistan must make sure presence of schools and colleges in each district of Balochistan, as many regions lack colleges and students remain deprived of education which results in poverty.

Secondly, Government must make sure that all colleges remain functional with all the facilities provided to the students including labs. Ghost schools and colleges should be identified and made functional and rehabilitated.

Thirdly, Balochistan lacks teachers and lecturers, government should take radical steps to appoint qualified and talented lecturers in colleges, so that students may gain the knowledge and education they require.

Fourthly, Government should held Balochistan board responsible of the irregularities in results as happened recently. Students are not being given the marks according to the papers they have attempted.

Balochistan Board has been accused of showing discrimination in colleges in regard to marking, giving priority to special colleges.

Boards of other provinces give high marks to the students according to their ability but only Balochistan Board doesn’t award high marks to even position holders. That is the reason most of the students have passed exams in second and third division. This results in depriving students of opportunity to take admission in highly ranking universities and colleges in other provinces.

Government of Balochistan should investigate the reasons behind such irregularities and punish the culprits.

Finally, Government must eradicate corruption from education. This field should be fair and free from discrimination, nationalism and power.

“There must be merit everywhere.”

If government can solve such issues then there will be no one to carry protests on roads and attack the board office. No one will remain uneducated and no one will even think of cheating. First provide all the facilities then ask for good results, u will surely get it.

Author is a student of Mass Media in Bahauddin Zakriya University (BZU), Multan. He can be reached at: Roshinbaloch87@gmail.com. Follow him on twitter @Roshin_Baloch

Published in The Balochistan Point on September 11, 2015