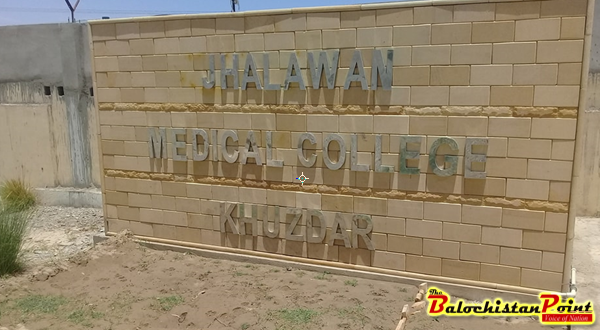 Jhalwan Medical College: A new phase of development in Balochistan

The launch of Jhalwan Medical College (JMC), a new established institute in the educational elevation for Balochistan will take it to the new phase of development. Its establishment has taken two years to be completely functional. The tribute will be paid to those eminent paradigms of Balochistan who have stepped ahead for the advancement of Balochistan’s education.

On 25, May class formally began at Jhalwan medical college (JMC). This medical college had remained dysfunctional for last two years. A wave of happiness rushed out in students in all over the Balochistan when it was announced in the newspaper for meritocracy list of students selected for Jhalwan Medical College. This could be a proud time for the student to become the part of this medical college after the entrance test conducted by Higher Education Commission (HEC) in the month of February 4, 2018. Altogether with another medical colleges in entire Balochistan on the merit quota other seats approximately 150, after reservation of students has been allocated.

Talking to this scribe   a student of  (JMC)  Zaheer Lashari,  first year students of this newly established institute expressed his views on tackling the healthcare crisis in future on basis of need of medical colleges. “Balochistan’s advancement always depends on best education system and fully operative and well equipped institutes. This college will struggle to be recognised in the country in some years.  The constitute of medical colleges in the province may represent the education climbing at the summit of development.” He added.

Another student Kabeer Baloch told that Medical colleges would assist the province to cope with healthcare crisis.  He added: “ Newly established medical college has administration which is fully operative and having hostel facilities.”

Acceding to the students the Pick and drop services for students is fully active. In subsequent months, the Jhalwan Medical College will be completely be equipped with laboratories and innovative medical technologies for students.

The journey started for uplift of education within province is emphatically admirable. These medical colleges will not merely modernize the province but also produce some normative healthcare staff. The setting up of institutes will be treading Balochistan on the journey of progression.

Published in The Balochistan Point on May 29, 2018

2018-05-30
admin
Previous: 2.6 million women in Balochistan are deprived of right to vote: Women activists
Next: Bike Wheeling : A dangerous and deadly act to life