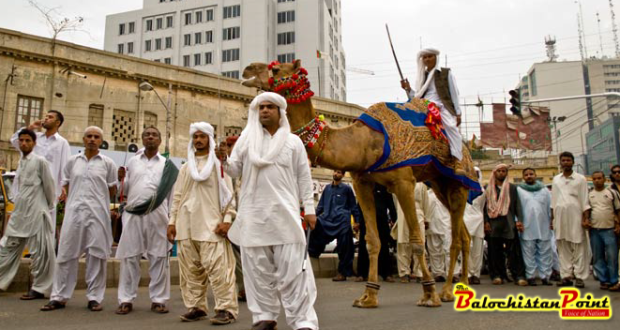 Balochistan is the largest geographical province of Pakistan.  The inhabitants of Balochistan are called Baloch. The Balochs are known because of their rich tradition and culture aspects.

Cultural landscape of Balochistan portrays various ethnic groups. Though people speak different languages, there is a similarity in their literature, beliefs, moral order and customs. Celebrating of culture day is a sign of gladsome nations. The people who celebrate their culture are reviving around the world. Celebrating of culture day is a best mean to shield tradition, civilization and culture. It shows ones fashion, lifestyle, emotions with their civilization and country mates.

The 2nd March is the Baloch culture day. Where the Baloch men wear a white long turban over their heads, various kinds of jacket and Balochi shoes with white and long pyjamas and females wear Balochi dresses handcrafted with threads with different beautiful designs. Because it is Balochi culture dress. Everybody looks very happy and keep a smile over his/her face in order to show his/her happiness.

On the contrary, the lower class of the society cannot be neglected because this is very needy class of the society. Every 2nd March the Baloch culture day is celebrated but in Balochistan the lower class category is suffering acutely from multi deprivations and when the upper and middle classes celebrate the culture day they become victim of inferior complex. Celebrating of culture day is not an illegal activity as Islam does not allows its followers to celebrate such days which create feelings of deprivation and un-humanitarian obligations.

I request my nation fellows to support such poor people so that they may also celebrate this auspicious day with us enthusiastically without feeling sense of deprivation.

Published in The Balochistan Point on March 1, 2018