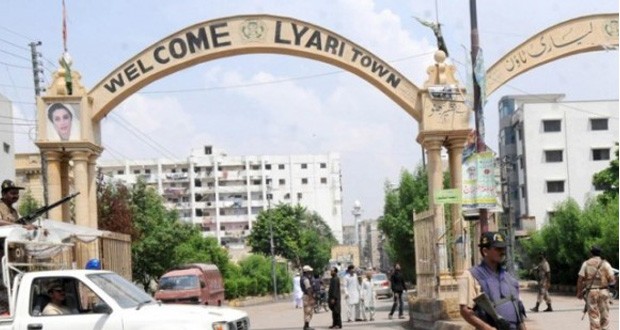 Lyari: Who will be the godfather? – Part 2

Rahim Zard Kohi was a young man of Iranshar, the city of Sistan Balochistan. He lived near the Kheri check post in Zard Koh. In Shah Muhammad Raza’s era he went to live in the hills due to the political aggression and started guerilla activities against the government. Rahim Zard Kohi was informed about an extortionist and a superstition Persian appointed officer. He collects all the information about the officer and his holidays. The officer’s holidays came and Rahim Zard Kohi got into the oasis of Sarbaz’s area, where there was a passing of the Gohimrik canal and made his waypoint and waits for the Persian officer. The day had come that Rahim Zard Kohi waited for. The Persian officer started his journey for his home. Crossing the canal, when the officer got into the hilly road of the city. A little distance ahead he came across with Rahim Zard Kohi. The officer was identified and he was the one whom Rahim Zard Kohi was waiting for to kill. Thinking for a while, Rahim Zard Kohi said to the officer. “You are wearing a Balochi dress and a woman is also with you and she is like a sister to me. If I kill you today, I will not be called a man”. Then he decided to let them go.

In the beginning of the Islamic Revolution of 1979, Rahim Zard Kohi went to meet a friend in Iranshar, but the information about his arrival got to the forces of the country and he was killed in a battle against the army.

On the bank of Lyari canal, there were Lyar trees extended densely over the area. The area did not have any name. It was named Lyari due to the fact that an extensive part of the area was surrounded by the trees of Lyar. There were graveyards everywhere. Different communities built their own four wall enclosure and they also built small graveyards. Even today the area is still the same as it was at that time.

In the British era this was not counted as part of the city. It was considered black water in the city. There used to be a sign where the Napier police station was situated. The sign clearly displayed ‘no go area’. It was an order from the authorities, especially for the English.  (Great Baloch philosopher Rahim Bukhsh Azad said while talking to Dawn.com.)

A few months before I was sitting in a gathering with one of my crime reporter friends. There was also a member of provincial minister cabinet sitting. They were all laughing at an active political senator who once belonged to transport business. If he were in Hollywood his fortune would be much shinier. One of them laughed so loudly and presented his view. He would have been a hero of those films in which Hitler was showcased. He looks like him; there is no difference between them.

Almost in the 2nd decade of the 18th century or maybe before that, Baloch had migrated from eastern Balochistan to Karachi, Balochi language critic and poet Asghar Ali Aazag said while talking to dawn.com. The possibilities for employment at the Karachi port pulled them towards this city, he further added. The employment of people of Karli, Bhagdadi, Shah Baig Lane and Hingorabad belonged to the Karachi port from the very beginning. In my childhood I thought of Karachi as an uninhabited city. Karachi did not reach further than from Lyari to Shershah.

This is 60’s decade. Pakistan is only 13 years old. Democracy has been ruled out and for the first time Army rules were established. Army dictator Ayyub Khan was going to perform Umrah. There was a piece of paper in his pocket, on that it was written. “O! Allah, forgive me without any check and balance.”(Shahab Nama, Quddratullah Shahab, pg.no.732)

In his long direct and indirect list of sins, Lyari would almost have not been included. This situation would change, in time, gradually. When the list progressed from the decade of 60, Lyari’s name was also included. He was an army officer like the father of Raza Shah Pehlvi, Shah Muhammad Raza. From the Kazik brigadier to becoming the king of Persian Iran, the cruelty of Shah Muhammad Raza was expanded, everywhere.

Afshan is the mid area of Sarbaz and Sarawan and some of the young boys would not see a brighter future there. The surroundings of their life seemed meaningless to them. They were with four or five brothers, young, energetic, and confident. They left from there, passing through western Balochistan, they made their waypoint in Lyari. If they intended to be employed, they must’ve turned their faces to the road that was attributed to the name of Charles Napier. The city was very small and the eastern part of Lyari was also desolate.

Karachi was not expanded in those days. Partridges were hunted around the streams of the jungle. In the area of trading estate, foxes came across that used to come to visit from Mangopir to the city. There were calm water ponds in Lyari, where ducks were hunted. The jungle of P.E.C.H was the absolute hunting place. (Pir Ali Muhammad Rashid, pg.no.112 as above.)

The shadow of the terror of those brothers who came from Afshan, was soon to be noticed everywhere. Ayub Khan was an army officer. He believed in power, more than in anything else. It is the story of those days when the riches of Napier road from Kumar cinema to Nigar cinema used to make the evenings more colorful. By defeating any of the Punjabi fops that used to do the business of ice, the terror of those brothers was established in the area. (To Be Continued)

Published in The Balochistan Point on January 31, 2015