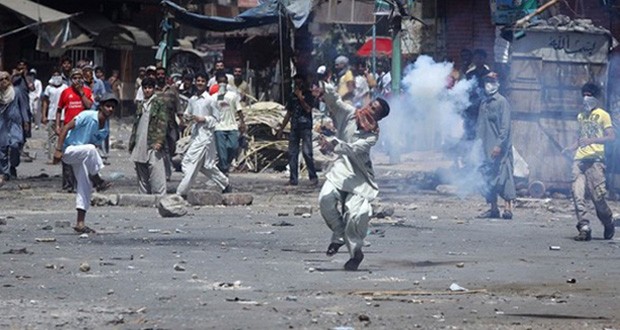 Lyari: Who will be the godfather? – Part 3

Ice: would decrease the strength of wine when put in the cups. The minds tired from all day’s problems would find peace. The hips and curves of the dancers with dark-eyed smiles would make them happy. But this was 1965; Ice was giving little pleasure to their minds. Political provocation and public opinion against Ayub Khan had made them tense. These feudal lords also included Ayub Khan’s son, Gohar Ayub’s friend as well. The feudal lords partying at Napier road in the evenings knew that Ayub’s son wanted to teach a lesson to the people residing in the settlements around city’s central jail because of supporting Mohtarma Fatima Jinnah in the presidential elections.

Violence has its own rules and regulations. You persuade someone who believes in power and abuse to hurt someone; actually you are giving them a decree to use violence as a weapon. “We have seen vandalism taking an institutional form during Ayub’s dictatorship, after which it became a part of our culture”, said an elderly progressive worker while talking to dawn.com. The business of ice was not profitable any more. The new business of using violence/vandalism to stop political discontent had started. The rallies of Baloch nationalists in Lyari were sabotaged. The political opposition by progressive student organizations was curbed through vandalism.

“Illiteracy and the feeling of being a minority became the reasons for crime. The Baloch of Karachi were a religious minority under Hindus before partition, and after partition they became an ethnic minority. They were more illiterate compared to others hence they got involved in criminal activities and remained on the borderline of city life”, this was said by social sector activist Elahi Baksh Baloch while talking to dawn.com. Elahi Baksh Baloch has spent 4 decades of his youth working in the social sector. He raises question about the absence of state in Lyari, especially Karachi. By quoting a research, he says we have entered an age of ‘private management’. People’s social actions are being watched by local guards.

“Lyari has always been an issue of concern for me”, said Zubair Dahani who works on Baloch language and literacy. From the start, after partition, this part of the city was never a part of the priority of the city administration. Urdu language was suddenly implemented as a medium of instruction, which leads to the hindrance in the education of many generations here”, Zubair said. “Even if some people did get educated, they were not in large numbers; to live such a marginalized life along with crimes seemed to have been bound with the fate of the people of this area”.

There is a certain addiction about the control gained over social life through violence. It becomes an example. If state institutions are weak and democratic institutions absent then it does not take much time to turn this example into a business. Based on the actions of army dictators, the local administration devised their own twisted philosophy. Both had same purposes. To kill the healthy political activities, while nascent. Same happened in Lyari. The list is rather long. At one point, every corner had a different ruler.

Democracy defeats violence. This is the decade of 70. People’s Party’s first government came into power during this time. Lyari comes out in a new color. People start to believe that they are not weak, their votes determines their fate. They feel that they have entered a new era. The fervor was noticeable. Those who believed in violence and were the instruments of tyrants used to curb political discontent disappear from the scene. Their philosophy for this time had changed like they were saying “Na cheer malangan noon” (Don’t disturb the Man of god).

Democracy wasn’t going to perpetuate hence ‘Malangs’ were to come back. Zia comes in the scene, whose predecessors were Ayub and Yahya. When Zia came, then in the past 7, 8 years of democracy the violent networks of those Malangs in Lyari had become weak. Political institutions, social organizations, people’s political awareness and the behavior of democratic protests had matured. Now it was difficult to use violence. In these years, Chakiwara Arh chowk had become the center of strong democratic protests, where youngster used to throw stones at police at Shedi village road. They used to catch the tear gas fired by the police and throw it back at the police, and would change their positions depending on the direction of wind.

Lyari had changed. Zia changed the strategy. He was going to use political maneuvers. He formed an organization named Baloch Itihad (Baloch Unity). The chief minister of Sindh at that time became a key partner of this organization. Despite lots of efforts, this organization wasn’t successful. Its different units in many streets started to close. Its activities became limited to the same Chakiwara football house from where it first started its activities. This organization has a very sad story. The head of the organization, Anwar bhai jan, was killed by a criminal Sharif aka Kachu at ghareeb shah road a few years ago because he was a relative of Arshad Papu. The killer was then killed in an alleged police encounter headed by Aslam Chaudhry.

The murder of Anwar bhai jan was the second biggest incident which took place by the hands of Abdul Rehman group. Rehman Baloch remained deprived of his father, Dad Muhammad Dadul’s, supervision as a child. His childhood was full of deprivations and frustrations and he was an anxious child who only had his little brother and mother around him. His tragedy is similar to the ‘Lamadre’ story by Italian writer Natalia Ginsburg. That story “explains the events in a mother’s life through the feelings and thinking of her children. Children observe the complexity of life through their natural simplicity and then deduce innocent results from those observations” (Kamal Abdali, ‘Aaj’ vol 54, Pg 306). Rehman’s step brother, uncle’s son and mamo’s son were self involved. Fatah Muhammad, the son of Sheer Muhammad aka Sherak, was looking after family affairs. Most of his time was spent in deciding small issues or at gatherings with friends in the evening. (To Be Continued)

Published in The Balochistan Point on February 10, 2015