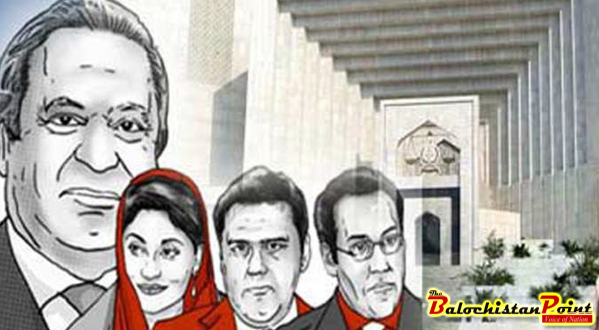 Initially, the final judgement of Panamagate leapt a layer of joy and pleasure in the circles of both the petitioner and respondent. The apex court jurisdiction was perceived as a win win situation for PTI and PML (N). Apparently, the verdict had imparted neither clean chit nor disqualification of Prime Minister Nawaz Sharif. The pleasure of PTI was converted into reservations after couple of days. They questioned the Joint Investigation Team working in the presence of incumbent PM Nawaz Sharif.

The recent report on the Panamagate even parted the judges of the bench into two groups. The dissenting notes of Justice Asif Saeed Khosa and Justice Gulzar Ahmad emphatically differed from the views of Justice Ejaz Afzal Khan, Justice Sh. Azmat Saeed and Justice Ijaz ul Ahsan. This dissension of the views among the judges led to the formation of Joint Investigation Team (JIT). The report of JIT would prove to be closed book.

Two of the five judges of the bench recognized the liability charges against Prime Minister Nawaz Sharif. The disqualification verdict was issued on the basis that discrepancy has been found in the speeches of the Nawaz Sharif addressed inside and outside the parliament. Followed by this, he didn’t defend himself in the prospect of assigning solid evidences to be exonerated from the charges put against him. Moreover, the documentary proof in the form of letter of the prince of Qatar has no any solid legal ground to be considered as authentic source.

The remaining three judges also indited their observations. They neither vindicated Prime Minister Nawaz Sharif nor disqualified him. Opposed to this, they propagated the cause that disqualification of the state executive without substantial evidences would be injustice. So, to accomplish the process fairly, the joint investigation team was ordered to be formulated within seven days.

The joint investigation team would consist of nominees of FIA, NAB, SECP, SBP, ISI and MI. the team would be headed by the senior official of FIA. Assigning the leadership task to FIA has certified the skeptical glance on the role of NAB. This investigation task is normally assigned to NAB. But unfortunately, the NAB chairman had shown indifference to provide the concerned authentic proofs regarding the Sharif family in the Panamagate proceedings.

The joint investigation team will be formed in seven days followed by its report submitted within sixty days. The team needs to present its periodic report after each 15 days for a purpose to monitor the credibility.

The weak institutions could not materialize free, independent and impartial investigation. It can be substantiated by the fact that these institutions are not run by institutional strength rather than individuals’ discretion. The individuals are constrained by their personal compulsions along with political pressure that impede them from performing something distinguished.

In the case of JIT, the role of NAB, FBR and FIA are more important because of the fact that they reside records. Opposition parties claim that the supreme executive of the state might be influential over the institutions to work impartially. In this prospect, they have demanded the resignation of Prime Minister Nawaz Sharif.

Formation of JIT means that the Panamagate case would be elongated. Elongation process of Panamagate case has diverse impact. It will put a pressure on institutions to work and at the same time, it will dilute the pressure of the case.

One of the most important effects regarding the elongation process is its influence on the coming election. The formation of the investigation team, investigation by JIT, submission of report, scrutinization of the submitted report by the Supreme Court and re-arranging the judgement takes much time. After the investigation of JIT, the final decision by Supreme Court will appear at the time when the government will be at the verge to complete its tenure. So, any kind of judgement would prove more influential on the coming election.

In a nutshell, opposition political parties have showed reservations regarding the role of JIT. The political prophecy of opposition leaders have realized the fact that JIT would nominally work but not produce some substantial evidences regarding the disqualification of PM Nawaz Sharif. So, the jurisdiction will go in the favour of Mian Nawaz Sharif. This decision will not only vindicate him from the charges but also help him to be influential on the coming election.