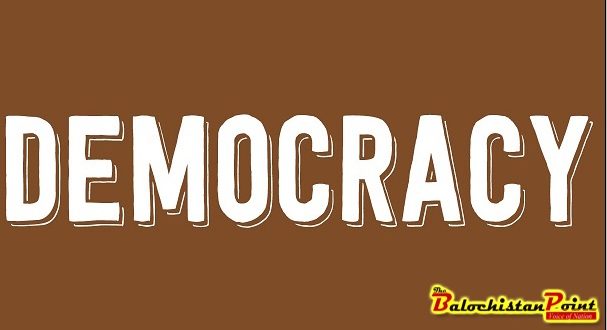 Why Democracy fails in Pakistan?

Politics and democracy cannot be differentiated. They have the same characters. Politics nearly to me is the “Process of out coming something”. The politics practiced by politicians in the context of Pakistan cannot be called as a politics. The politics of Pakistan is a challenging aspect in every part and arena. There are huge myths and errors in while following the politics of Pakistan. Students Federation is having big role on the student political profile. Due to ban on Students federation from General Zia-Ul-Haq era, the students are in different political organizations in the name of “IJT, ISF, JTI, PSO, and PSF”.

While giving some facts about politics let me introduce that how politics of Pakistan is in process.  First issue here comes with the backward areas of Pakistan like Fata IDP’s (internally displaced people), Balochistan, Sindh (TharParkar) and the poor people in internal Punjab. As in research of DR. Aliya she says that poor people in Pakistan give vote due to their needs. They are paid for their votes. And they vote following the will of politicians.

In Baluchistan “Females” are not having National ID Cards. Even they are not given rights and they take permissions from their guardians for every phenomenon.  In Baluchistan, Fata and DIR the females are not allowed to caste vote and hardly 5% of vote is casted. Media is used as a tool for the elites of the Pakistan for their own benefits.

As using word in my article topic “A threat to Security” it basically means to me is that  each state allows its citizen to ask questions from their government or state institutions that while using funds or doing any political works what is the really regardless word behind him. And state openly accepts the queries and answers it openly without any issue. But here In Pakistan asking question makes an issue.

State institutions didnot allow people to ask or give feedback on any issue regarding state system. Mainly issue is with our politicians and establishment. In the 70 years of Pakistan governmental history we can say that 40 years have been ruled by “Martial law” or “Military rule”, and 30 years by politicians. The cause of military rule in Pakistan is due to the failure of democracy. From the start we are having issue with Democracy. On 14th 1947 August when Pakistan got independence after 8 days on 22 August Jinnah dissolved the government of “Khudai khidmatgar movement” in NWFP.  From that very day the crashes in Pakistan democracy.

Hurdles in democracy of Pakistanis the politicians gave space to the military rule. I would simply say that why political system is weak or not workable? While giving very fresh example from Balochistan government is that Chief Minister of 2013 elections he got some hundreds vote and he became the representation of Balochistan for two and a half years. Election commission is having its patronage system.

We want classlessness but we are still waiting for Democracy. There are some people who decide the future of many people but those are a not workable process. In real sense of democracy while not asking questions is also a big disability and they are having fears that we can’t get jobs. Basically we systematize the system.  And that’s why system is fail and disabled. It needs extra efforts.

Published in The Balochistan Point on May 28, 2017