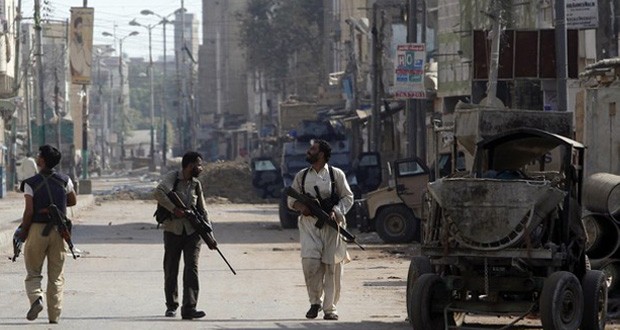 Lyari: Who will be the godfather? – Part 4

Fatah Muhammad gets killed on a land feud by the hands of Hafiz Pirzada’s acquaintance-Salman Brohi’s son Ghaffor in the Dalmiya area. In those days Rehman starts to spend more time at the base of his father Dadul’s disciple Haji Laal Muhammad aka Haji Lalu (father of Arshad Papu). He spent his time, good or bad, with Arfaat, Arshad Papu, Nasir, Shera and other brothers. Actually these were his training days, while People’s student federation had spread terror in most of the areas of Lyari. Reksar Lane had Babu Dakait and Majeed speed, Jahanabad’s area had Haji Lalu and Gul Muhammad Lane had Fida Jogu and Salamu’s control.

“How runs this magazine? Who writes against me, what wrong have I done to them that they cannot see my qualities?”, said Haji Lalu to a journalist who had gone to meet him to find the reality behind a story published in that magazine. Haji sahib had just finished eating mangoes and was hence continuously trying to pull out the fibers from his teeth.

“Perhaps magazine was kept under tons of Charas because each of its page smelled so much of Charas like Charas was inhaled from top of it every day and night”, the journalist laughingly told his friends about the meeting.

Haji Lalu was jealous of Salman Brohi. The murder of Fatah Muhammad was an opportune moment for him. He wanted to murder Suleman through Rehman. Little time had passed. Suleman considered Haji Lalu to be weak and was satisfied because of his influence. He used to freely move around in his car but Haji Lalu kept a watchful eye. He had figured out that Suleman uses which roads to enter the city and which places would be easy to hit him. At last, he was killed along with his brother-in-law near old vegetable market. This was Rehman’s first big incident after which his name was feared in Lyari.

After this murder, soon Haji Laal Muhammad aka Haji Lalu became the God Father of Lyari. Jahanabad, Pak Colony, Chakiwara and other areas had come under his control. These were the last years of 90s. Rehman and Haji Lalu’s son Arfaat were very close friends who were running the entire network. But this friendship was made of weak strings. There was a silent struggle going on from both sides. Interests were colliding. The market was not spread out, where Haji Lalu was in control as God Father. Rehman was at second place, and was known as his disciple. Whether it was Sonara market, land feuds or transporter issues, Haji Laal Muhammad Lalu was overseeing all this as God Father. Crimes had increased in these years. Small groups were involved in their own crimes. Which included robberies passerbys at night, taking money to threaten or beat someone, and robbing banks and houses were some of the ways by which these groups earned money.

Rehman was separate from these groups, and held the biggest more organized group. He also had the power to become God Father but his affiliation with Haji Lalu was loosening his stature. This inner struggle had to come out in the open some day. In the Afshani street in Rehman’s mohala, one of Haji Lalu’s member gets killed who use to run a Charas and Afyun base. This murder becomes the breach which lead to a never ending chain of bloodshed. Afshani Street is a maze located at Mewa Shah Road in the 10 union council of Lyari. Many streets of this mohala lead to Kalakot, Reksar Lane, Bawapat, Gabol Park, Eid gah and many other mohalas. There are three main paths in this street. Mushtaq Mosque is located on first, Haji Dada Muhammad Hall on second, while the third path leads to Kalakot. When the intervals of peace came in Lyari, then the researches from the UK and US used to come to this mohala to conduct research on Balochi language. Many white people spent some days in these streets along with their families.

Rehman was well aware of the strong defense boundaries of his mohala. It was very difficult for any attackers to return alive after entering this area. But perhaps Rehman was unaware of the fragility of the political situation. After ousting Nawaz Sharif, walking on the footsteps of Ayub Khan and General Zia, Pervez Musharraf got in power. The split between both these groups was converted into gang war by the political and local administration under military rule. Haji Laal Muhammad was living near Mewa Shah Graveyard and Sheer Shah Bridge and used to attack Rehman’s area along with his sons, especially killing people at Ghareeb Shah road. On the other hand Rehman was targeting their people. Hundreds of people were killed in the cross-fires between both these groups. Sometimes they had skirmishes during the day, other times bunkers were used to fire at each other all night. Sometimes the administration backed one group, and sometimes the other.

“One night, I was going back home from the newspaper office as usual. I heard firing after crossing Bizenjo chowk Chakiwara, which was coming from somewhere close. I quickly thought to turn back to Lee market but I had realized that the situation has become unstable. There was frequent firing from both sides of the road between Bizenjo chowk and Ghareeb Shah Dargah. I was stranded. From Gul Muhammad Lane, Mullah Sultan and Majeed Speed’s people were firings, while Rehman’s people were firing from Afshani mohala side. It felt dangerous to move forward or to return. But I kept moving forward because I had to go home. There was an armed police vehicle slowly moving towards me from the front. My 6th sense was telling me that I might die today. At the entrance way of Jhat Pat market, I saw two armed men in front of the small street leading to Afshani Gali. They signaled me to come close. At soon as I reached near them in front of the street both of them started asking simultaneously, ‘who are you? Where are you coming from?’ I replied quickly without even taking a breath,’ I am coming back from my job, I work at a newspaper’. After seeing my face they ordered to walk straight in the street and do not look back because the police is coming. After this incident, I declined to go to Lyari at night”, this was told by Balochistan University Turbat Campus’s Deputy Registrar Gungzar Baloch while talking to dawn.com. (To Be Continued)

Note: This article is fourth of five part series and it was originally published in Dawn Urdu Website.

Published in The Balochistan Point on March 10, 2015

Lyari 2015-03-10
Editor
Previous: Editorial: Next Chairman Senate Should Be From Balochistan
Next: Unwise Decision: Studying Away From Home