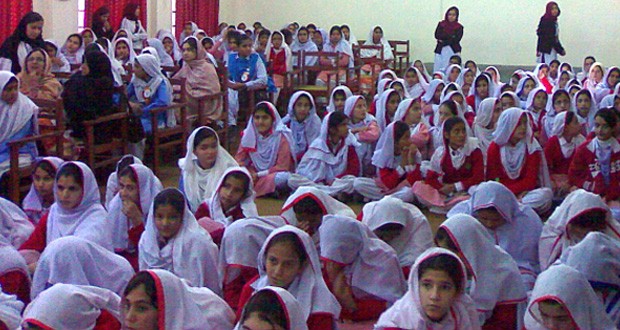 Quetta – Pak primary girls school situated on Dr. Bano road has been closed down amid protests from civil society and legislators.

Balochistan High Court had taken notice of the matter and asked government to submit a report on allegations of closing down the school to facilitate Land Mafia.

Female members of Balochistan assembly protested against closure of the school on the floor of assembly on Tuesday.

Sardar Raza Barech, Advisor to Chief Minister of Education, clarified that Pak Primary school has been shifted to the building of nearby high school. He claimed that a directorate of education for Quetta district would be established in the building of primary school.

Shama Ishaque Baloch, female legislator of ruling National Party rejected the explanation of Mr. Barech. “Today, the building of girl’s school would be used for education directorate and tomorrow for some commercial purpose,” said Miss Baloch.

Rahila Durrani of PML-N also criticized the decision of closing down Pak Girls School. She maintained that government offices are not established in congested residential areas where this school is situated.

District Education Officer (DEO) of Quetta, Mateeb Khan rejected the allegation that School was closed to favor any land Mafia group. He said that educational activities have not been affected due to the closure of the school as students of Primary school had been shifted to high school.

Members of political parties don’t agree with the explanation of DEO Quetta. Members of JUI-N and local body councilors say that establishment of education directorate is a flimsy excuse to justify closure of a school.

“Shutting down a girl’s school and converting it into a government office proves how sincere is the Balochistan government in its policy of educational emergency,” a member of civil society told The Balochistan Point.

Instances of alleged Land grabbing have started to surface since current government took power in 2013. Earlier, there were allegations that a girl’s school was being occupied by Land Mafia on Quarry road Quetta.

In February, hundreds of people protested against an attempted Land Grabbing of graveyard in Quetta by a Land Mafia attached allegedly with a government party.

Published in The Balochistan Point on March 13, 2015

Education Land Mafia 2015-03-13
Editor
Previous: Balochistan: A Catastrophe In Form Of Famine Is Expected
Next: A Memorable Visit Of Iran