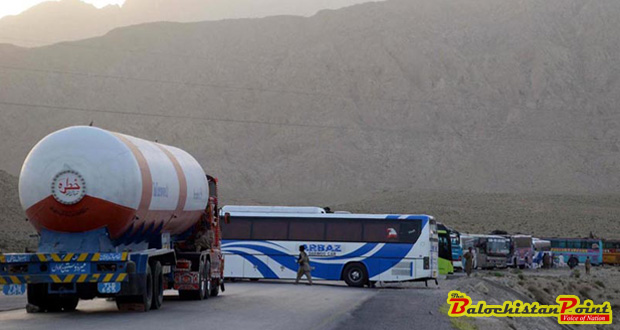 Editorial: Balochistan Government Should Serve The Public Not Land Mafia

Transporters in Quetta city are on strike since 20th April. For more than two weeks, passengers that want to travel to Quetta from interior Balochistan are facing a great deal of misery. Reason for this strike is that Balochistan government is hell bent on shifting all bus stands to Hazar Gunji, a suburb located 32 KM out of Quetta city. The indifference of Balochistan government to the suffering of common people has even forced people to ask whether Dr. Malik is there enemy number one?

The idea of shifting bus stands to Hazar Gunji was envisioned in late 1990s. Logic behind this decision was to reduce the flow of traffic in Quetta city. Hazar Gunji failed to materialize as a project due to several reasons including long distance form Quetta, security situation and lack of intra-city transportation services. Hazar Gunji was used as pick and drop point for passengers for few years and that caused a great deal of misery to common man. On public pressure, majority of bus stands were shifted back inside the city. Since coming to Power, Dr. Malik government is doing its level best to shift all bus stands back to Hazar Gunji.

Dr. Malik Baloch, Chief Minister of Balochistan, is running a coalition government and he is under the influence of his main ally, Pashtoonkhwa Milli Awami Party (PKMAP). It’s alleged that some ministers and members of Provincial assembly belonging from PKMAP have bought majority of land near Hazar Gunji. These people who serve as land mafia in Quetta are behind the decision of shifting bus stands to Hazar Gunji. If all bus stands are shifted to Hazar Gunji then the value of land owned by members of Land mafia would inflate by hundreds of times. So, Dr. Malik is pleasing his allies at the cost of common passengers of Balochistan which is condemnable.

Normally, Bus stands are located out of cities to reduce the flow of traffic inside the city. Hazar Gunji was also planned for the same purpose but it lacks pre-requites for such bus stands. The biggest problem is lack of availability of comfortable transport that can be used by passengers to reach Quetta city from Hazar Gunji. Balochistan government has utterly failed in making any arrangements in this regard and that’s what made Hazar Gunji a failure. If a passenger travels from Mastung to Quetta then he pays Rs. 100 as fare to reach Hazar Gunji but he has to pay further Rs. 200 to reach Quetta city. This is equivalent to economic murder of poor people of Balochistan and not acceptable under any circumstances. Secondly, Hazar Gunji has a high crime incidence and robbery, snatching and looting of valuables is a common occurrence. Traders in Hazar Gunji close their shops well before evening. In such circumstances how can passengers use this as a pick and drop point in the evening?

During last two weeks, Dr. Malik and his cabinet has not done anything to resolve the issue. Dr, Malik even claims that shifting the bus stands to Hazar Gunji is in interest of people and that’s why He would not reverse that decision. Karim Baksh a resident of Dhadar told The Balochistan Point that he would have to pay extra Rs. 250 to reach Quetta city if bus stands are shifted to Hazar Gunji. Mr. Karim questioned Dr. Malik that how is paying an additional Rs. 250 per trip in his best interest? It’s clear that Balochistan government has no regard whatsoever for the plight of common people.

The Balochistan Point had argued in its editorial in February that shifting bus stands to Hazar Gunji would be a huge mistake. In this editorial, Balochistan government is urged to stop protecting the interests of land mafia and prioritize the convenience of common people. Decision of shifting Bus stands to Hazar Gunji should be postponed till the time when adequate arrangements are made. In a realistic situation, it would take years, not months to turn Hazar Gunji into a suitable location of Bus stands of Quetta. Meanwhile, Bus stands can be allowed to operate from Sariab raid and Spini road. Government should provide facilities to the passengers in these temporary bus stands. That’s the need of the hour and demand of the masses and government should act upon these recommendations without wasting any time.

Since coming into power, Dr. Malik Baloch has been nothing but a major failure. He has let the people of Balochistan down in very aspect. Detractors of Dr. Malik justifiably say that incumbent government has set new records in failure. Now, it’s clear that Dr. Malik would not be Chief Minister after December 2015, as per Murfree Accord. Therefore, Dr. Malik must make at least one pro-people decision in his tenure and reverse the decision of shifting of bus stands to Hazar Gunji. If he doesn’t do that then a bleak future waits ahead for him once he leave the office of Chief Minister. He would be even a bigger example of failure than Nawab Aslam Raisani.